So, Clarence Williams And Fred Rich Walk Into A Studio…

Some credits for “Keyboard Express” confuse its composer, a pianist and vocalist named Mike Jackson, with bass saxophonist and King Oliver sideman Reverend Charlie Jackson, who is in turn often confused with bluesman Papa Charlie Jackson. “Mike” is also short for “Michael,” so the King of Pop is also on hand to make a mess of web searches.

Other sources confirm Mike Jackson as composer, but the tune’s title, its big introductory chords and winding central theme sound like the work of a pianist. In fact Clarence Williams Jazz Kings’ strip the tune down to just the leader’s piano and it exudes bright, plinking charm (listen here or below, and thanks to the owner of this website):

Williams was a composer in his own right but all business. Barring owing anyone a favor, Williams must have heard something he liked in “Keyboard Express,” thought Jackson’s tune would sell and decided to record it. Columbia marketed the record but the composition apparently never made a splash; Williams supplied its only recording (until the Southern Syncopators‘ 1993 album Happy Pal Stomp).

It’s impossible to glean if and how Lou Davis, John Fred Coots, Larry Spier and Sam Coslow ever heard “Keyboard Express.” Maybe some musical minds occasionally think eerily alike. Some just steal others’ work (Clarence Williams probably did). Either way, Jackson’s stepwise theme pops up in appended form on the foursome’s “Revolutionary Rhythm,” here given a medium tempo, hot foxtrot treatment by Fred Rich and His Orchestra on a record made a little over a year after the Jazz Kings’ side:

Introduced in the musical Illusion and sung by Buddy Rogers as dance feature for Lillian Roth, “Revolutionary Rhythm” fared slightly better than “Keyboard Express,” with recordings by Rich, Willie Creager and Bob Haring. An Internet search for the team of songwriters on “Revolutionary Rhythm” is also far more revealing than one for the lone composer of “Keyboard Express.” 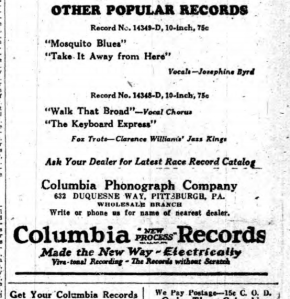 Stacking both records side by side, we can compare Clarence Williams and Fred Rich, one’s Jazz Kings and the other’s Orchestra. Music historians might discuss jazz and popular music. Record collectors might subdivide hot and commercial, stomp and pep. In terms of performance, there is the distinction between arrangement and (some) improvisation. Compositionally, it’s a matter of a jazz tune and a Tin Pan Alley song. From a marketing perspective, one is a race record and the other (just) a record.

On one very specific level, we have a jazz composition by a now obscure Black composer that only received one recording in its time, recycled/plagiarized by a group of White composers and converted into a popular tune that gained far more attention. Ironically for some, the recording by a White band has far more improvisation than that of the Black band. Either way, the difference between these two old records is as complicated and current as Black and White.

Through both records and everything attached to them, there is that ascending phrase, more like a sequence or even an exercise, yet still typical of jazz. From its ragged beginnings to labyrinthine heads by Parker through Blanchard, jazz is often associated with instrumentally conceived melodies featuring lots of jagged turns, with piping, springy leads and songs that are hummable but not necessarily singable (unless you’re a Baroque diva, or Sarah Vaughn).

There is something telling about Jackson’s riff being used for an anthem to hip music. The bridge of “Revolutionary Rhythm” even ups the ante with modernistic harmonies and offbeat rhythmic emphases on the bridge. The riff itself is slightly mechanical but rises inexorably, like some efficient escalator headed to a wonderful destination. It’s not the trickiest jazz head but it is uplifting. It also unites several musical worlds, albeit in a very tricky, potentially disappointing way. It all depends on what you pay attention to.