Nothing But Sudie Reynaud

In case any producers were wondering, “The Complete Sudie Reynaud” would fit on one compact disc.

A whole CD devoted to an obscure Jazz Age bassist might require some snappy marketing, and many collectors already own this collection via reissues under Reynaud’s more well-known collaborators.  Sudie Reynaud will undoubtedly, and thankfully, remain unknown in every sense of the word.

“Maybe Brass Bass, or Bass Sax, On My Next Album…”

His discography lists him as playing both string bass and tuba, which evidences a basic, and therefore all the more impressive, skill needed to gig in Reynaud’s time.  “Bass” meant both “string” and “brass” varieties during this transitional period in jazz and American pop, so “bass player” meant someone who could double both instruments.   Steve Brown did so reluctantly, preferring his bull fiddle and the chance to unleash a signature slap technique.  Cyrus St. Clair on the other hand preferred to puff rather than pluck: he stuck to brass bass well into the forties, developing jazz tuba into an art decades before Howard Johnson or Bill Lowe.  John Kirby split the difference through clean, fast and clever bass lines on both instruments.  Chink Martin doubled without drawing too much attention to himself on either instrument, yet his foundation and lift can be heard on dozens of recordings.

Reynaud cut just sixteen sides in his life, recorded sporadically between 1926 and 1933 in Chicago.  Like Martin, he serves a functional but spurring role (except for two barely audible sessions on tuba with Fess Williams that can be heard here).  On “High Fever” with Doc Cook’s band, Reynaud catches all the ensemble hits and resonates under the band without overwhelming it, even through a stomping final chorus:

While Freddie Keppard‘s ranging cornet dominates this side as well as “Sidewalk Blues,” Reynaud’s part is simple and well-defined: provide ground rhythm and outline the harmonic skeleton (while doing so musically, as Tom Smith’s comment below explains).  That role doesn’t allow any insight into Reynaud’s influences, his style, or his personality.  All that’s left is pure music, which makes the strutting atmosphere on Jelly Roll Morton‘s tune possible:

If Reynaud were known for nothing other than contributing to “Here Comes The Hot Tamale Man” he’d have an enviable legacy.  It remains one of the most rhythmic, confident examples of “hot” artistry from this or any other era, and it’s hard to imagine without those roots and fifth punching away underneath:

Five years later Reynaud was back in the studio under the direction of trumpeter and would-be Louis Armstrong rival Reuben Reeves.  The antiphonal lines of reedman Franz Jackson‘s arrangements and the loose, declaratory, Armstrong-inspired language of the soloists illustrate the evolution from hot jazz to nascent big band swing, as do the four steady beats of Reynaud’s string bass, which never steals the show but does make it possible.

He’s felt rather than heard through the swirling darkness of “Zuddan.”  He nourishes the stream of solos on “Mazie” and “Screws, Nuts and Bolts” (which includes the simply dirtiest growl imaginable, courtesy of Reeves).  Only on “Yellow Five” does Reynaud peek out from the curtain, with thwacking strings and a strong four beat slap towards the end of the side:

[Click Here to Listen to “Yellow Five,” by Reuben “River” Reeves and His River Boys]

There’s no way now to understand him as an artist, no recorded innovations or theatrics to shed some light on him as a human being as well as a sideman (for this listener, his tone isn’t even as distinct as that of Country Washburne, Pete Briggs or John Lindsay).  There aren’t any memoirs, interviews or even biographical entries pertaining to Reynaud, either because no researchers have bothered to look or he died without leaving any to find.  Whoever Sudie Reynaud was, he did his job.  In other words, “Sudie Reynaud,” historical enigma, biographical cipher and musical everyman, is now pure music.  There are far worse fates.

The Consequences of Freddie Keppard

Freddie Keppard’s entire discography fits on one compact disc. It’s an ironically modest recorded legacy, especially for someone who was known for everything but modesty in their lifetime. 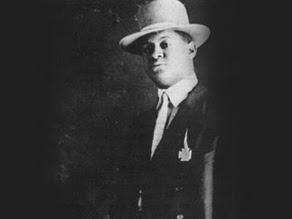 By most accounts Keppard was proud to the point of arrogance. He came up through the ranks of New Orleans cornetists, drew crowds on the vaudeville circuit of both coasts and was more than willing to proclaim and demonstrate his musical prowess. A photograph of the cornetist, dressed smart but tough in double-breasted suit, wide brimmed Boss of the Plains Stetson and ornate lapel medal, looking out intently with a touch of haughtiness, provides a visual allegory of the musician that no less than Jelly Roll Morton and Sidney Bechet would praise years after his passing.

Keppard’s few recordings provide teasing glimpses of his huge sound and dominating style on cornet. In Keppard’s time jazz was still transitioning from collective ingredient to solo expression. The cornet was intended to provide a solid lead, with power and color supporting an ensemble. Extended solo outings, decorous lines and multi-chorus explorations wouldn’t come into play until one of Keppard’s younger New Orleans colleagues arrived on the scene.

In addition, most of Keppard’s recordings were cut with Doc Cooke‘s large dance orchestra, in which Keppard actually played the second horn part, not lead. Keppard’s role was to heat things up during an out chorus, or contribute intense but short breaks to Cooke’s written arrangements. Many of Keppard’s sides also suffer from the worst indignities of twenties audio technology. It’s a miracle anyone still cares about this loud-mouthed ensemble player.

True to reputation, Keppard demands attention. The Cooke band’s sides on Columbia Records’ certainly help: a pristine electric recording process and the diffuse acoustics of an empty hotel ballroom capture the Cooke band cutting loose on some of their hottest charts. Keppard’s brash interjection on the aptly named “High Fever” [at 0:23 in the following clip] doesn’t have anything to prove; though brief, its cocky stride tells the listener Keppard knows exactly “who he is”:

Following the piano solo, Keppard’s blasting riffs behind lead cornet Elwood Graham [at 1:07] might not provide the best instruction in providing accompaniment. Yet Keppard wasn’t there to teach or blend or simply be heard; his presence was meant to be felt. By the time the closing “dog fight” arrives [at 2:15], whatever name was written on the lead part becomes moot. This is Keppard’s tune, with driving phrases and an infectiously “funky” break [at 2:26] bringing it to a close.

Keppard isn’t doing much technically, but his impact on the Cooke band is immense. A few months later, he brings an equally gripping effect to the clean, almost concert band-like reading of the opening theme on “Sidewalk Blues,” an interpretation that he seems to self-parody and then detonate for the ride out [starting at 2:12 in this clip]:

Keppard’s hair-trigger change is the type of “sweet to hot” juxtaposition that twenties bandleaders loved to include in even their most straight-laced material. Yet Keppard’s changeover also reminds us of the brash, occasionally volatile personality he was known for. Perhaps his most powerful maneuver was turning down an offer from Victor Records to record in 1916. The reasons for Keppard’s refusal are now legend, ranging from a concern that listeners could “steal his stuff” to balking at having to record a test pressing without pay (standard operating procedure for record labels at the time).

Whatever his motivations, they point to a man who refused anything short of what he wanted. They also point towards the Original Dixieland Jazz Band’s session of February 26, 1917, considered to be the first “jazz” recording ever made, courtesy of a group of “non-improvising White musicians” and an event still debated (and despised) on both musical and cultural grounds.

Whatever else might be said of Freddie Keppard’s music or his personality, even his smallest gestures had huge consequences.  He wouldn’t have had it any other way.