Bob Zurke collapsed while playing his regular gig at the Hangover Club in Los Angeles sixty-seven years ago today.  Alcoholism and the worst excesses of life on the road had taken their toll on the pianist, culminating with pneumonia and his death the following day.  While most photographs show a much older man with a worn down face, Zurke had just turned thirty-two.

What photographs don’t highlight are the hands behind the wild pianism Zurke left behind on records.  Born to Polish immigrants on January 17, 1912 in Michigan, by sixteen Boguslaw Albert Zukowski was professional pianist “Bob Zurke,” whose small hands and short fingers didn’t lend themselves to the wide intervals of stride piano.  Blessed with talent, imagination and a genetic dispensation to go his own way, Zurke would spin wildly intricate independent lines on the keyboard, as though separating both hemispheres of his brain and then instigating a fight between the two of them.

Gunther Schuller describes a “dynamic hurricane-like force…light years removed from the polite babbling of most 1930s band pianists.”  To be fair, when compared to the swinging polyphony on “Diga Diga Doo” with the Bob Crosby orchestra, any pianist would sound reserved:

The bulk of Zurke’s all-too-brief career was spent with like-minded musical individualists in the Crosby band, which brought the warmth and stomp of New Orleans into the Swing Era.   Zurke’s best work with the Crosby group combines brassy exclamations reminiscent of Earl Hines, the rich counterpoint of the Baroque and the sheer “wow” factor of virtuosos and athletes alike.  On the usually twee “Tea for Two,” Zurke adds a childlike sense of mirth, like a kid superimposing dirty limericks onto a nursery tune:

Features with the Crosby band such as “Little Rock Getaway” and “Yancey Special” show him to be a uniquely room-rumbling boogie woogie stylist.  Yet ironically Zurke’s most impressive, and personal, boogie on record (and coincidentally his last recording) is the accompaniment for the 1944 cartoon “Jungle Jive” (enjoy the music and avert the eyes from the dated, offensive visuals):

Zurke’s solos would occasionally start to ramble, and his intricate lines weren’t always well served by the recording techniques of his time.  Musically that was about all all he had in common with most of his colleagues.  Unfortunately Zurke did share many musicians’ taste for living hard and fast.  After leaving Crosby and briefly leading his own big band, Zurke gigged around Chicago and Detroit before settling, and falling, in Los Angeles.

Crosby bandmate Bob Haggart recalled “You could hear only a bar or two, and you’d know it was Bob Zurke.”  The late George Shearing admitted “He always amazed me,” and Dick Sudhalter said Shearing was capable of an “uncanny” imitation of Zurke’s piano.  Yet an early death, modest discography and idiosyncratic style don’t always allow much of a legacy or influence beyond collectors and specialists.  Unlike some other alcoholic martyrs of jazz, Zurke’s story just seems sad, not romantic: a one-of-a-kind voice, destroyed by his vices and largely forgotten.

And then there’s the music.  Is there anything those hands couldn’t do?

A Song By Any Other Name: The Right Amount of “Deep Henderson” 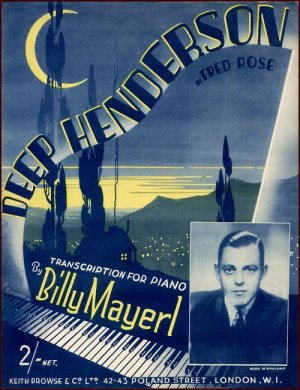 “Deep Henderson” illustrates one pop tune that became just popular enough. Tom Lord’s Jazz Discography lists thirteen different bands recording Fred Rose’s composition in 1926, the same year it was published in Chicago, with four other groups cutting the tune the following year (in three different countries, no less). Most bands also used the publisher’s stock arrangement, adapting it to their needs and style rather than starting over fresh as they might with so many other jazz warhorses. Unlike “St. Louis Blues” or “Tiger Rag, ” “Deep Henderson” became a controlled study in the variety of bands and approaches at one small juncture in American popular music.

Bill Edwards describes “…one of the most sorrowful and wistful songs [he’s] encountered,” with “…long sustained high notes leading downwards to the end of each phrase help[ing to] punctuate [his feeling].” Apparently the secret to this song’s success was jettisoning its sad, I-wanna’-go-back-to-the-South lyrics and slow, bluesy feel (which can still be heard courtesy of Edwards here). By the time the Coon Sanders Nighthawk Orchestra hit the studio to give “Deep Henderson” its inaugural recording, the tune was gussied up to make it more flapper friendly:

The Nighthawks were an immensely popular group, and their creamy saxes, strutting brass and re-playable shellac introduced a wide audience to “Deep Henderson.” Co-leader and pianist Joe Sanders handles the written solo with enough downhome swagger to offer some reminder of Rose’s original vision. Yet the rhythm is overwhelmingly upbeat (almost coy), aided by Pop Estep’s bumping tuba walking four to the bar behind the trumpet solo. While their reliance on written music and novelty numbers may deny them entry into the hallowed chapters of “jazz” history, the Nighthawks gave many Americans a good idea of how loose and lowdown pop can get.  They sound downright raunchy compared to Mike Markel’s band (follow the arrow to the link):

Markel’s block chord introduction and racehorse tempo likely impressed dancers, with robust saxes and clipped brass choreographing their stomping feet. Yet the band’s jerkier rhythm doesn’t leave much space for legs flying off the dance floor. The horn man (Red Nichols? Earl Oliver? An unknown player?) soars to the occasion, as do the saxes behind the brass, recalling society band string sections. In light of sax riffs getting faster, trickier and uniformly high-flying in the years ahead, their sustained harmonies are a nice touch. Markel’s approach has a nostalgic charm, a reminder of when pop music was intense and tight (in feeling if not always execution). Yet the recording does make the “New Orleans effect” even more apparent when listening to King Oliver and some neighborhood colleagues:

Oliver’s cornet immediately presages a much earthier, more personal account of the tune. The Dixie Syncopators’ tempo isn’t much slower than the Nighthawks, but their easygoing inflection and subtle backbeat make it sound like they’re taking their time. The saxophone section parts way for Barney Bigard’s slap-tonguing tenor, perhaps dated but undeniably percussive (and as texturally original as prepared piano or distorted guitar). Even the soprano sax adds a howling, haunting dimension to the clarinet trio.

Drummer Paul Barbarin’s “Oh, play it Mr. Russell!” during Luis Russell’s solo plays up the informal air, yet such exclamations may or may not reveal the insidious, timeless hand of marketing. Improvisation and swing are the breaking news here: Oliver’s greasy responses over the saxes (especially heroic in light of his aging embouchure), and Kid Ory’s lurching, sly trombone over the closing chorus make this, the second recording of “Deep Henderson” pressed, a very distinct chapter of the tune’s short but hot history.

Of course Miff Mole adds his smoother, more rounded yet equally punchy trombone over the chirping clarinets that close Markel’s recording, and even the drummer gets in some solo syncopations. The way each group, section and soloist navigates this arrangement points to a difference of delivery with a shared intent. The “same old stock” can never be the same, not if you’re a musician with something to say or a record consumer with a paycheck. At a time when pop is reticent to market covers (even as the same tune in the same rendition gets beaten into the ground over air and internet), it’s also a reminder that the question of originality often begins with “how” as well as “what.”

Lord lists seventy-one recordings total of “Deep Henderson.” I must admit that in light of Oliver and others’ experiments, Bela Dajos’ rich, buttery society version comes across as either insularity, or the sincerest form of parody:

Well, we can’t end without hearing Vince Giordano do it!  Live, in 3D, with glorious sound and from outside of Lord’ discography:

Want more? Be sure to share your favorites in the comments, and hope you enjoyed the tour.