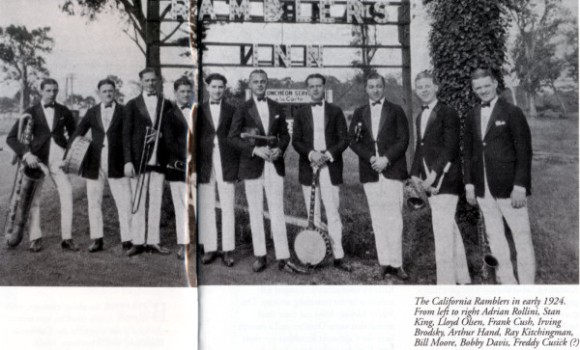 Like most early jazz drummers, Stan King was not well served by technology. He first appeared on hundreds of sessions with the California Ramblers, including the band’s numerous offshoots for different labels, starting in the early twenties. Acoustic recording techniques at that time limited the equipment that drummers could use and weren’t kind to what remained. King does burst out of the Five Birmingham Babies (a.k.a. the California Ramblers) on “Arkansas” to bang some springy drum rudiments on Ray Kitchingham’s banjo:

Unfortunately outbursts like this one were rare. King didn’t use standard acoustically sanctioned percussion like cymbals and blocks as much as his contemporaries Zutty Singleton, Baby Dodds and Chauncey Morehouse. So despite all the records, it’s hard to hear what or how King was playing early on his career. Either way it got him plenty of work. He must have been doing something worth hearing.

Based on slightly later recordings, it involved plenty of snare drum. Jazz drumming now tends to emphasize metal as the primary beat maker, yet as “Broken Idol” with the Ramblers shows, King could really move a band with drum skins. It’s a pity he was so skilled with what amounted to kryptonite for most recording engineers of the twenties:

Aside from a few cymbal crashes and the faux-oriental blocks and tom-toms, King’s main rhythmic medium here is his snare and bass drums. He keeps up a simple but buoyant bounce alongside Tommy Felline’s banjo and steps out behind Pete Pumiglio’s (red hot) alto sax solo. The brushes are pure momentum, more than compensating for Ward Lay’s slightly ponderous tuba. There’s none of the military-style heft that so many historians associate with prewar, snare-centric jazz drumming.

King’s work with Frank Trumbauer’s orchestra demonstrates his light but propulsive touch on drumheads, while never drawing too much attention to the wheels moving the band. “Futuristic Rhythm” includes a head-bobbing rhythm in the first chorus as well as percolating accompaniment to the leader’s vocal and cymbals behind Bix Beiderbecke:

King’s airtight press rolls and last chorus backbeat on “I Like That” (a.k.a. “Loved One“) are simple, impeccably timed and very effective:

Listening to King nearly sixty years later, renowned drummer Mel Lewis pointed to King’s “clean” style with more than faint praise. A crisp, precise and utterly unobtrusive approach defines King’s style more than any part of the drum set. He was above all an ensemble player who rarely soloed but always made sure that the band was “well fed” (to paraphrase bass sage Walter Page describing the role of the rhythm section).

With the Charleston Chasers, King leaves most of the rhythmic heavy lifting on “Loveable and Sweet” and “Red Hair and Freckles” (what were these guys thinking about on this session?) to pianist Arthur Schutt and bassist Joe Tarto:

Dancers and jazz aficionados may not be listening for King’s sizzling brushes and tapping rims, for how his drums click in with Tarto’s bass and produce a deliciously buzzy sonority or for his simple but firm beat. Listening to those touches reveals how subtly King could color and catalyze a band. It also points to an attention to detail and a knack for musical nuance that might not be heard could be felt. For example while many drummers use press rolls, and King relied on them throughout his career, the way that he loosens his press rolls up behind Tommy Dorsey’s trumpet solo on “Hot Heels” with Eddie Lang makes a difference:

Audio wizard, historian and trombonist David Sager recalls an “old-time drummer” he met at a gig in California years ago “who nearly shouted when he said, ‘Stan King had the best press roll in the business!’” King’s press rolls with none other than Louis Armstrong on Seger Ellis’ “S’Posin” might not impress on their own, but Armstrong scholar Ricky Riccardi explains that “Armstrong liked loud, emphatic drumming and he obviously dug what King was putting down.”

[Listen to “S’Posin” via Riccardi’s outstanding blog here, and subscribe while you’re at it.]

According to Richard Sudhalter King didn’t read music. His “natural drive and quick ear” were enough to make him one of the most in-demand drummers in New York during the twenties and thirties, performing with Paul Whiteman, Jean Goldkette, the Boswell Sisters, Ben Selvin, the Dorsey Brothers and Benny Goodman among others. A session directed by bass saxophonist Adrian Rollini finds King with the cream of the New York jazz crop at that time on standards such as” Sugar” and  “Davenport Blues”:

On “Somebody Loves Me,” King lays out behind George Van Eps’ solo, which allows his guitar to get heard and changes up the ensemble texture, but digs in behind Goodman’s clarinet and Arthur Rollini’s tenor saxophone while easing back behind trumpeter Mannie Klein and trombonist Jack Teagarden. It’s a model of sensitive, rhythmic jazz drumming (or “dance band” drumming, depending on one’s preferred pigeonhole):

King could also turn up the heat on his own. On “The Man From The South” with Rube Bloom, he locks in with Adrian Rollini, tosses out fast, snappy fills and bears down just a little harder behind Goodman before making room for Rollini’s solo:

On “Here Comes Emily Brown,” again with the Charleston Chasers but without Joe Tarto’s booming slap bass, King add a sizzle to his shuffle behind Tommy Dorsey’s trombone while his cowbell accents practically kick Benny Goodman from behind. Fills and backbeat on the out chorus also boot the ensemble:

King even gets some spotlight in a call and response episode with the ensemble on “Freeze and Melt” with Lang:

Occasionally King would get away from a steady beat and toss out unexpected accents and syncopations, for example early on his career behind Bobby Davis’ alto solo on “That Certain Party” with the Goofus Five (a.k.a. the California Ramblers):

or his offbeat rim “bombs” behind Jimmy Dorsey’s alto on “You’re Lucky To Me”:

Yet it’s all within the context of the band. Record after record shows King to be a clean, precise, utterly musical drummer. While his preferred instrumentation may have limited his recorded legacy, that same unflashy style may have hindered his historical one. Singer Helen Ward, speaking about King’s tenure with Benny Goodman’s band, said “we called him strictly a society type of musician. Everything he played was ‘boom-cha, boom-cha.’ There was no fire there.” Surprisingly enough Benny Goodman, who King not only played with but frequently pushed on record, described King as “merely adequate.”

The entry for King in the Encyclopedia of Popular Music describes “an exceptionally good dance band drummer with meticulous time [whose] jazz work always left something to be desired. Listening to, for example, Goodman’s recordings in late 1934 will reveal how King’s playing never lifts the band in the way Gene Krupa did when he took over as drummer…” John Chilton describes Louis Armstrong’s “I’m Putting All My Eggs In One Basket” as a “typical example of [King’s] somewhat foursquare playing:

King isn’t Krupa, Dodds, Sid Catlett or for that matter Elvin Jones, but it’s easy to imagine any of those players taking the same approach that King does given the thin material, flimsy arrangement and the fact that this is really Armstrong’s show. Riccardi astutely points out King’s “tasty” accents during Armstrong’s opening trumpet chorus, and the fact that “relaxation is the key” here. There’s a difference between playing stiffly and playing appropriately, a difference King was more than experienced enough to understand.

In the stylistic wake of louder, better-recorded and busier drummers, it is easy to overlook someone like King, who performed an essential role seamlessly and without drawing attention to his work. What some overlook, others celebrated. Drummer Chauncey Morehouse would praise King for his solid time years after his colleague’s death (when Morehouse led his own date playing his patented N’Goma drums, he chose King to handle traps duty).  Fud Livingston thought King was “the world’s greatest drummer!” Saxophonist and historian Loren Schoenberg noted how King continued to get work despite his well-known status as a “fall-down drunk.” It didn’t seem to matter; King got the job done.

Jazz historian Scott Yanow, who credited King for his “fresh” sound, explains that King’s alcoholism finally did get the best of him: King eventually took a low-key job with former California Ramblers sideman Chauncey Grey before fading from attention and passing away in 1949. King made his last recordings ten year earlier, with pianist (and fellow victim of alcoholism) Bob Zurke. “I’ve Found A New Baby” wasn’t the last thing King recorded but it provides explosive closure:

Fud Livingston’s arrangement gives King and the rest of the band plenty of room. King is a force of nature, crisp and light as always but distinctly forward in the mix, perhaps the influence of what Krupa and Chick Webb were bringing to the table at the time. King still remains his own man, with press rolls in first chorus and rim shots and backbeats egging on Zurke’s contrapuntal flurries and Sterling Bose’s trumpet. At a time when most drummers were emphasizing cymbals and a steady horizontal flow, King stuck to skins and a charging but tight vertical feel. He had something unique to contribute and put the needs of the band first. That certainly sounds like a jazz drummer or maybe a just a good band drummer, but definitely a drummer worth hiring, and hearing.