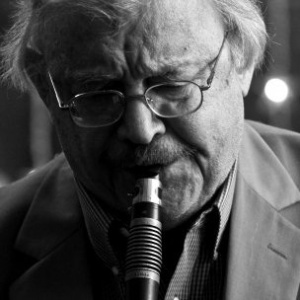 Joe Muranyi passed away last Friday.  A bad Internet connection and a busy weekend kept the news from me until Monday, and uncertainty about what to say kept me from commenting until today.

Muranyi was best known as the last clarinetist to play with Louis Armstrong, as well as a good friend of Armstrong’s, a prodigious jazz writer and a fine musician in his own right.  Muranyi was a link to a seminal force in music.  He was also the person who taught me how to give Louis Armstrong the benefit of the doubt.

As a younger listener,  I was one of those Louis Armstrong fans who just assumed that the great trumpeter’s career as a jazz artist ended some time around 1928, when big bands, vocals and Tin Pan Alley made him into a (mere) “popular entertainer.”  Joe Muranyi’s liner notes for the 1989 BMG/Bluebird CD Laughing Louie taught me better.  Knowing the man and his music well, he pointed out that Armstrong wasn’t holding back, he was playing just the notes he needed for maximum impact.  He wasn’t selling out by leaving jazz tunes behind, he was flexing his imagination and chops by looking ahead to new material.  Most of all, he was reaching more listeners.  Armstrong was all about reaching people.

Muranyi’s commentary moved like great sports casting.  It was also optimistic, open-minded and above all insightful, treating these 1932 and 1933 studio sessions not as popular concessions or the product of opportunistic management, but as the sincere work of a pensive yet joyful artist.  In short, Muranyi heard music, and from then on so did I.

And that’s all I have to say about him.  I’ll leave the rest to some other writers who help me to hear more and understand better:

“In Loving Memory of Joe Muranyi” by Ricky Riccardi at The Wonderful World of Louis Armstrong.