Something To Say In Four Sides: Paul Biese And His Novelty Orchestra

Bandleader Paul Biese enjoyed critical as well as popular acclaim in Jazz Age Chicago and is now known to only the most diehard period aficionados. Such is life for many popular musicians. Yet Biese’s records provide an insightful, powerfully individual snapshot of the transition from popular music of the teens to jazz’s infiltration into the mainstream during the twenties.

The aptly-titled “Fast Asleep In Poppy Land” is heroin-speed instrumental ragtime, alluding to the cacophonous collective interplay of the Original Dixieland Jazz Band, only without much improvisation and a hard-edged, urban take on the “nut jazz” no doubt all around Biese and his sidemen. Biese’s tenor saxophone moans on top of, through and all over the band, probably as much due to his vicinity to the recording horn as his tone and billing (he was the leader, after all):


Vrooman’s sound, especially on “Dardanella,” hint at his possibly having heard the lift that New Orleans import Freddie Keppard gave bands with a couple of well-placed blasts:

Biese’s “Dardanella,” with Vrooman blasting out of the familiar ostinato and the leader booting like he’d be right at home in a rhythm and blues combo thirty years later, makes Ben Selvin’s peppy multi-million selling record of the tune seem unequivocally tame. Regional styles, bouncy but somewhat buttoned-up New York versus hardboiled Chicago, can already be detected at this point.

Like their Chicago counterparts in Isham Jones’s band, there’s a sense of experimentation with instrumental roles and small group textures in Biese’s group. The leader tries out different saxophone registers for varied effects. The rattle and clang of Lou Goldwasser’s rag-a-jazz drumming and Arnold Johnson’s rapid-fire piano add ferocious drive as well as color. Ralph Williams’s banjo, which jazz historian Mark Berresford has described as a typically Chicagoan blend of melody and rhythm, even adds some zither-like tremolos for a percussive effect on “Yellow Dog Blues.”

Contemporary music history taxonomy may have a hard time pigeonholing Biese’s music, and it’s easy to simply write it off “not jazz,” but its sheer energy, confidence and personality reveal more than just transitional commercial efforts. This was a band with its own voice, easy to dance to, fascinating to listen to and frustratingly absent from most reissues. 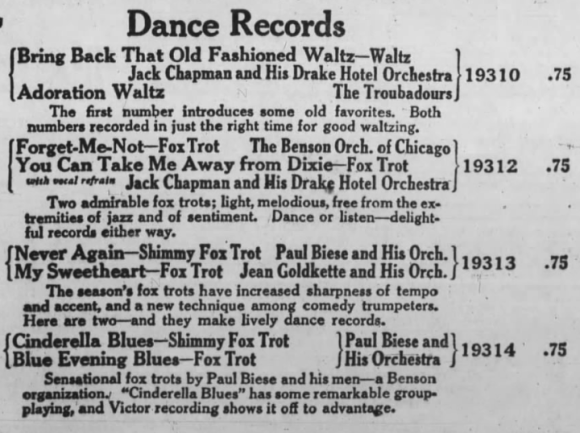