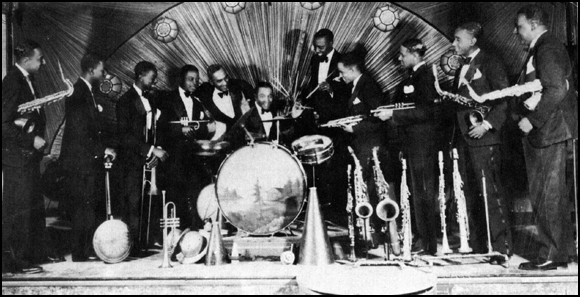 The Missourians (courtesy of redhotjazz.com)

Prior to recording some of the big band era’s most swinging music, Cab Calloway’s band recorded some of the most stomping jazz as “The Missourians.” Yet even earlier, the group operated as “The Cotton Club Orchestra,” the first house band at the legendary venue. That earlier incarnation is often overshadowed by later versions.

Compared to the Calloway orchestra or The Missourians, and despite mostly static personnel, the CCO might sound restrained, perhaps indistinct. Yet instead of hearing just an earlier, milder version of a familiar group, experiencing its music as the work of the inaugural band for the swankiest club in New York City opens up both its style and excitement.

If the Calloway orchestra swung, and the Missourians stomped, the CCO strutted. It played music for rich patrons who wanted a lowdown good time uptown. The music was bluesily highfalutin, not too clean, not too dirty. On its first recording, the CCO sells “Down And Out Blues” with a blend of energetically straight, cleanly-declaimed section leads and cultivatedly-hot solos over a pounding bass:

Here, “sweet and hot” are more matters of degree than clearcut contrast. “Snag ‘Em Blues” starts off with a showy introduction right out of a Broadway revue before plunging into a downhome hot trumpet chorus, with some slap-tongue baritone sax adding more chug later on:

“Original Two-Time Man” and “Riverboat Shuffle” first come off as peppy but relatively straightforward dance records. On “Charleston Ball,” the CCO’s bright, transparent sax section playing against the brass makes it sound like Fletcher Henderson’s band. Yet the style is in the details:

The fancy trumpet parts on “Riverboat Shuffle” are technically impressive, while DePriest Wheeler’s trombone slurring and barking over Earl Prince’s piano takes the glitzy clientele lowdown. The Hendersonian “Charleston Ball” emphasizes a star trumpeter, in this case Sidney DeParis’s tense muted expositions rather than Louis Armstrong’s instrumental arias. The CCO understood the musical conventions of its time well enough to make those conventions their own yet still recognizable.

A band doesn’t need to be innovative to be original. “Everybody Stomp” makes the uniquely busy, sometimes “over-arranged” quality of twenties orchestration into a tour-de-force:

The second chorus keeps changing the lead in continuous two and four-bar increments; reversing the order for the bridge is another nice touch:

A Redmanesque clarinet trio is followed by a tightly-muted, staccato trumpet. A burbling bass clarinet is followed by a hot squawking trumpet. This side crams so many instrumental combinations into just under three minutes it’s like a hot Brandenburg concerto.

The group’s final recording as the CCO emphasizes soloists and a slightly more even rhythm. Instead of the ensemble introducing the melody on “I’ve Found A New Baby,” trumpet soloist Roger Dickerson gets the honor over a steady 4/4 rhythm. Later on, tenorist Andrew Brown gets a whole solo chorus without an alternating instrument for the bridge. These ideas point ahead to more sophisticated big band charts and the emergence of the soloist as the prime mover in jazz:

At the same time the sax section chorus, with its inner parts moving in contrary motion, points to the contrapuntal sound of the twenties. The soloists themselves are also their own men, confidently of their time. Brown plays a heavy, choppy tenor. Dickerson sounds proud of his instrument’s military origins, striking his notes cleanly, with a slight scoop adding tension. His work also has a touch society band-restraint, especially compared to his fiery outbursts with The Missourians two years later. Here, he comes across like a dicty Bubber Miley. The whole band plays with a refined intensity unique among records from this era.

Dickerson, Wheeler, Brown, Prince, banjoist Charlie Stamps, tubaist Jimmy Smith and drummer Leroy Maxey all stayed in the band through the early thirties, when Calloway began replacing Missourians. That core membership goes back to violinist Wilson Robinson organizing Robinson’s Syncopators back in St. Louis. That’s four names in roughly a decade (five counting a record with nominal leader Andy Preer listed), each reflecting different musical priorities, ranging from Manhattan via Harlem chic through roaring blues to slick but sincere backing for one of popular music’s largest personalities. All bands have a history. This one has archaeology.

Cab Calloway was a musician who made “singer” and “bandleader” mean something.  That’s not always the case, as too often anyone who can warble some lyrics or wave their arms gets to claim those titles.  As “Jitterbug” from 1934 illustrates, Calloway had a superb command of his voice and an imaginative technique to go with it.  At the same time a musician (and businessman)’s ear for talent made sure his band was never just accompaniment.

The introductory sax soli makes it easy to imagine Cotton Club patrons dropping their jaws, putting down their drinks and mouthing “c’mon!” as they pulled their partners onto the dance floor.  It’s not just Al Morgan’s ground-shaking bass and Leroy Maxey’s powerhouse drums; the whole band swings with inviting intensity.  Slightly ragged saxes glow with the energy of four teammates, rather than the airtight, overly streamlined blend of many contemporary sax sections.  Biting yet warm brass declaim the opening chorus, and when Calloway enters, there’s no sense that this was just instrumental prelude before the vocal main event.

Calloway sings like an instrumentalist, sometimes a languorous sax (“grab a cup and start to toss…”), other times scatting like he’s back to his early days as a drummer (“BUTCH-ee, wutch-ee, time will tell…).” Louis Armstrong’s influence is prevalent in the relaxed delivery and elongated phrases, but the smooth timbre and sudden falsetto outbursts (“’git along!”) are sheer Calloway.

Signature humor also shapes each syllable into an event: a pattering, “His favorite jitter sauce is…” finishes with a drawn out, massaged “rye.” It’s the same use of contrasts that the best Rossini tenors capitalize on, and which made Calloway a dynamic stage presence at The Savoy, The Cotton Club and throughout a sixty-year career. 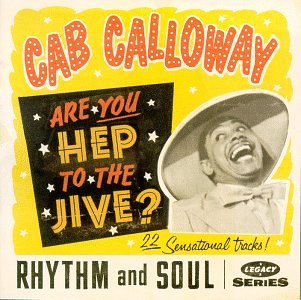 Like the best opera singers, surefire technique enhances Calloway’s theatrics: intonation and timekeeping never take a backseat to emotion.  That same technique also allows Calloway to lock in with a stream of exciting obbligati.  Full band, wry muted trumpet, swirling saxes, Harry White’s gutbucket trombone and Eddie Barefield’s winking alto all have their say alongside (never behind) Calloway as he shapes variation after variation on the same sixteen-bar theme.  What could have passed for a novelty paean to the joys of the bottle turns into a virtuosic jazz performance.

Calloway’s theatrical “All Bugs Out” makes musical sense when double-time sax figures segue into a call and response with the brass, followed by an agitated clarinet solo from Arville Harris.  By this point if you’re not dancing (on the floor or in your seat) you probably need your pulse checked. A syncopated brass break calls the final shout chorus to order, with some big-toned tenor exclamations by Walter “Foots” Thomas, until the rhythmic ante reaches its limit.

Just what the hell Calloway is saying as the record closes is a mystery to this writer, the best transcription being “how-some-dickie-in-som-mee-dips-a-mania.”  The singer and bandleader’s flair for onomatopoeic extemporization is fitting nonsense: words were just the beginning for Cab Calloway. 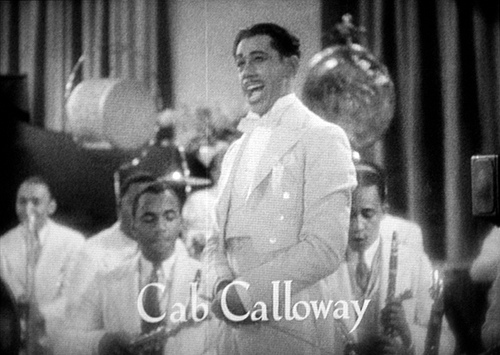