Heading straight into a song sans introduction is one idea that earned postwar jazz musicians their revolutionary credit, yet here it is on the Dixie Daisies’ “Papa Blues” of 1923:

Composer and piano roll powerhouse Max Kortlander may have originally written “Papa Blues” for his instrument of choice; the tune’s built-in chromatic breaks sound very pianistic. The Daisies’ clarinetist takes them on to provide an instantly recognizable hook at the outset of the recording as well as textural and comic relief. The ex nihilo gong is also pretty funny, and the novelty works as a segue into Kortlander’s second strain, here clothed in faux-Eastern robes. 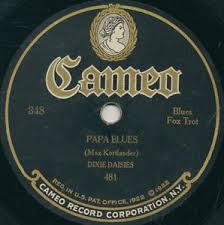 Nine decades of stylistic and cultural progress may make this section sound dated or even insensitive. From a strictly musical lens, the arrangement plays off a contrast between the down home major key and ragging trumpet of the first strain with the minor key exotica and nasal, almost-oboe like tone the trumpeter assumes in the second strain. The same goes for the succeeding chorus, which pits a straight saxophone lead against runaway double-time collective improvisation. The double-time sections are particularly ingenious: the trumpet and clarinet alter their tone as well as their rhythm so that the 78rpm record sounds like it’s being played on a 156rpm machine! The last chorus swaps the clarinet’s winding breaks for commentary from each of the players, offering further contrast as well as teasing at symmetry with the first chorus.

Dixie Daisies was one of the many aliases that record companies used for their studio bands, which could include now well-known names or players who remain anonymous. The Original Memphis Five often recorded under this pseudonym but this group doesn’t sound like the OM5 (who recorded the tune on multiple occasions in a very different arrangement.) This edition of the Daisies most likely included trumpeters Hymie Farberman and/or Jules Levy Jr. as well as trombonist Ephraim Hannaford, players in Joseph Samuels’s circle who got plenty of work but whose approach was based in one of American music’s vestigial limbs.  The Daisies happened to have waxed “Papa Blues” in April of 1923, the same year and month that King Oliver brought his Creole Jazz Band with young Louis Armstrong into the recording studio for the first time, setting the stage for a major shift in the sound of American music.  This music was made at nearly the same time as what many historians might consider the cause of its own obsolescence.

Whoever it was on the Cameo label’s “Papa Blues,” they were there to feed a dance-greedy public with records intended as disposable commercial products. Even an intricate chart like this one was all in a day’s work for them. Past those initial expectations and beyond temporal prejudices, there’s a smart piece of music at work here. Maybe it’s even smart enough to be “jazz.” 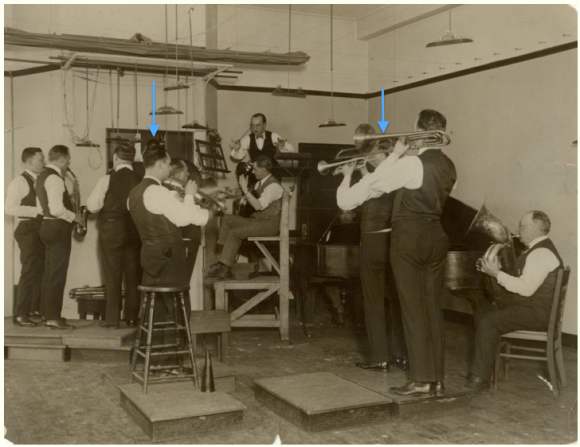 Columbians Dance Orchestra in 1921 with Farberman and Hannaford marked. Photo from Mark Berresford.

Here’s a case for all the popular music that jazz musicians had to record just to make ends meet during the prewar era.

The following session includes some of the best players in New York at that time, regulars in Ben Pollack‘s band and performing here in one of the many studio groups organized by impresario Irving Mills. Young Benny Goodman sticks to reading alto saxophone parts, and Jack Teagarden’s trombone is barely audible, yet it’s not just commercial dross:

Scholars and purists will probably fast-forward to Jimmy McPartland’s cornet solo. Some might even mention criminally underrated saxophonist Larry Binyon. Yet McPartland is as rich, penetrating and warm on straight lead as he is in his Beiderbecke-inspired improvisation.  A typical prewar sax section (two altos and a tenor) has a bright, buttery sound that’s a refreshing change of pace from more modern reeds. Even the unknown, operetta-inspired crooner sounds more than bearable with Dick McPartland’s banjo, Harry Goodman’s tuba and Ray Bauduc‘s drums guarding the beat behind him.

Despite the simple tune and small space given to improvisation, a group of talented musicians makes it beautiful as well as rhythmic.  There’s no way to tell if heroes are happy, but these professionals certainly sound good.