It Seems We’ve Heard This Song Before: David Hajdu and the Familiar Stan Kenton

Music critic, arts journalist and Columbia professor David Hajdu rightly inspires pause and even protest when it comes to celebration.  His rebuke of Stan Kenton, spurred by what would have been Kenton’s hundredth birthday and the ensuing centennial tributes to the bandleader and “progressive jazz” impresario, remind us that anniversaries and events are only as valuable as the person or cause behind them. 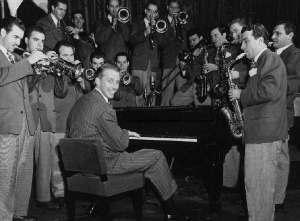 Hate the Man, Hear the Music (and Make Sure the Bandstand is Big Enough)

Unfortunately Hajdu’s scathing critique of the man, his music and his ego (as well as the connection between the three shared by plenty of other musicians) is all too familiar.  Kenton’s bombastic big bands, seeming love of complexity for complexity’s sake and dominating personality made him a welcome whipping post for critics throughout his career (and beyond, apparently).

As Marc Myers points out, Leonard Feather nicknamed Kenton “Can’t Stand Him,” and the monumental accompanying text for Ken Burns’ Jazz miniseries includes an informative but ultimately troubling portrait of Kenton courtesy of Gerald Early’s essay White Noise and White Knights.  Kenton not only had the audacity to (try to) play bigger, louder and more intricately than everyone else, he had the sheer chutzpah to tirelessly promote work that he believed in.  In light of current events, his christening that work “jazz” while simultaneously questioning or denying jazz’s African-American roots adds a whole other layer of discussion (best left to other platforms).

Besides borrowing some boilerplate Kenton invective (“…ostentation, gimmickry, and bloat…pretentiousness”), Hajdu takes a page from Gunther Schuller when he criticizes Kenton for increasing his instrumentation and playing “overwrought emulations of the early postwar avant-garde.”  Kenton wasn’t the first musician to try different instruments or new pieces; surprisingly it’s a fairly common practice in music.  That Kenton’s experiments were deemed null by some critics while being praised by some musicians is another song heard before.

Yet Hajdu’s most familiar criticism comes when he mentions Kenton’s incestuous relationship with his own daughter.  Not every artist gets accused of incest, but there’s always enough criticism of creative work based upon personal attack to go around.  Reading this type of criticism can even feel comfortable, like a story we know so well or an old chair that we can’t help flopping down on, even though there’s a spring sticking out.

Richard Wagner, aka One "Behind the Music" You Can Put Off

The point of what this disgusting aspect of Stan Kenton the man has to do with the music of Stan Kenton is unclear, as most musicologists are still unable tell the difference between incestuous music and non-incestuous music.  For that matter, the elusive “arrogant, domineering braggart” school of music theory that informed the music of Jelly Roll Morton and Art Tatum is still under review.  Scholars still hope that Wagner‘s controversial libretti can offer insight about which of his instrumental passages are anti-Semitic.

The effect of Hajdu’s criticism is less mysterious and all too familiar.  His article will no doubt save a lot of potential concertgoers the time, money and (most importantly) the thought of having to hear this music themselves at Jazz at Lincoln Center, Manhattan School of Music, the University of North Texas or anywhere else.

It’s probably for the better.  After all, what do they know?  They’re just playing music.

Speaking of music, here’s the Kenton band in all its stentorian glory with “Malaguena.”  Dig those mellophoniums, man…