This post supplements an earlier one about Dillon Ober, based upon my access to further resources and desire to shed as much light as I can on this obscure, rewarding musician.  So the Dillon Ober story continues, and yes, so does this blog’s story.  Thank you for reading.

With just thirty record sessions spread out over less than five years under a handful of bandleaders and zero solos, Dillon Ober still earns respect from listeners who are fortunate enough to know his name. Best known as a drummer for Jack Pettis and Ben Bernie, he stays in the background on record yet lights up their bands, like a compact, white-hot lamp burning from behind stained glass.  Ober’s concise recorded legacy is easy enough to follow, twice as rewarding to listen for, but outside of the recording studio he was apparently much more than a sideman.

His skills as a percussionist, vocalist and stage cutup are spotlighted from the outset with the Mason Dixon Seven, his first “name band.”  The Mason Dixon Seven itself, which also included brothers Art and Ted Weems, was apparently very popular, gigging across Pennsylvania and earning local praise (even being remembered fondly in periodicals years later): 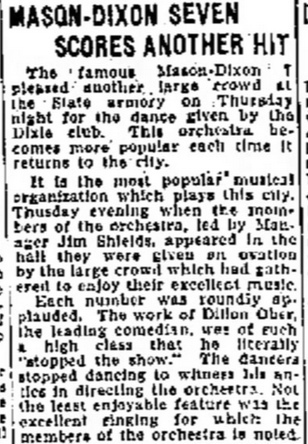 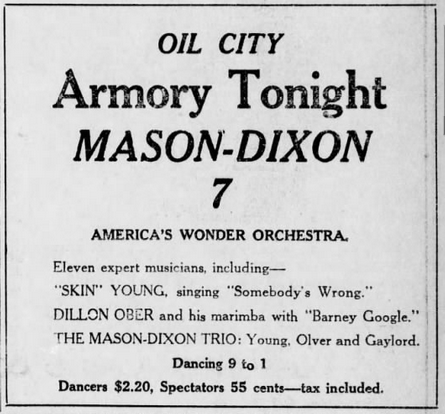 About a year before his first recordings in New York City with Pettis, Ober fronted a band under the auspices of Bernie himself: 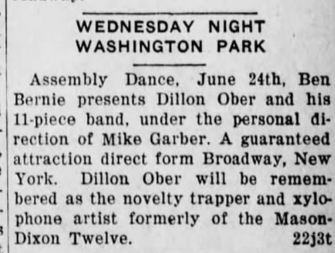 This article mentions an “attraction direct from Broadway” yet Bernie’s Hotel Roosevelt Orchestra was firmly installed at the posh Manhattan hotel.   Even more odd,  another article from the same paper mentions Ober right alongside “the Old Maestro” himself!

Typo? Name dropping? Either way, Bernie must have had some experience with Ober prior to his arrival in New York City, perhaps relying on Ober to direct bands contracted by Bernie for work around Pennsylvania.  Most revealing is that Ober had led at least one band and was in the spotlight before coming to New York City.  Showing a knack for good copy, Ober even describes his group as “the last word in fine dance music,” with further notices afterward: 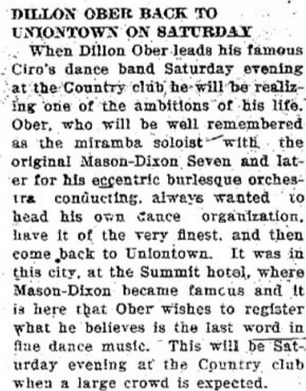 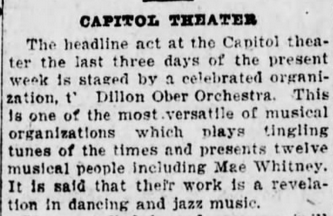 The “Dillon Ober Orchestra” (record collectors, be on the lookout for a potential Rust oversight!) even found time to make it to Brooklyn, NY: 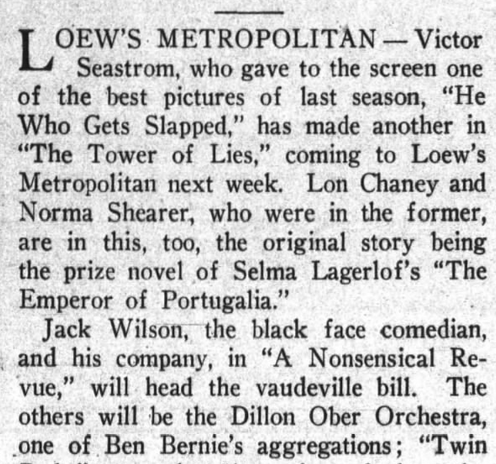 By November of 1925, Ober aka “The Musical Sheik” is even being billed sans accompaniment: 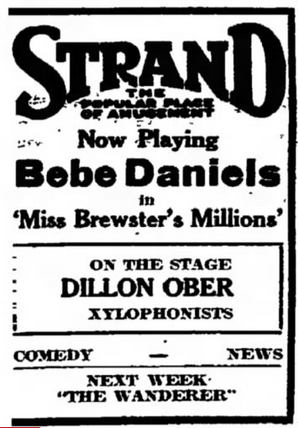 By (at least) December 1926, Ober was in New York City at his first recording session with Pettis, going on to complete his recorded legacy periodically throughout the next four and a half years with Pettis, Irving Mills and eventually as a replacement for Sam Fink in the Brunswick studios with Bernie’s band.  By May 1928 he also begins to appear in acting credits, such the Here’s Howe, with music by Roger Wolfe Kahn:

He continues to play with Bernie through August 1931 while apparently functioning as “chief clown” for his band.  Ober’s appeal may have been more than strictly musical (but records show he could more than hold his own as a musician). 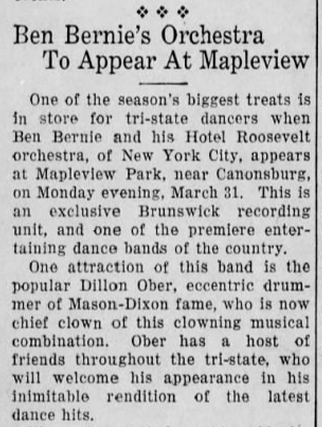 Apparently not tied down to Bernie, Ober pops up on a double xylophone bill alongside percussion pioneer Billy Gladstone:

Ober moved to the West Coast some time in the mid-thirties, playing in studio orchestras and continuing to build his acting resume:

It’s hard to tell the context, but here is a rare (admittedly blurry) photo of Ober himself!

Amidst a no doubt busy schedule, Ober apparently also found time to entertain his mother-in-law, visiting from their hometown of Clarksburg, WV:

Finally, here is notice of Ober finishing out his career with military service: 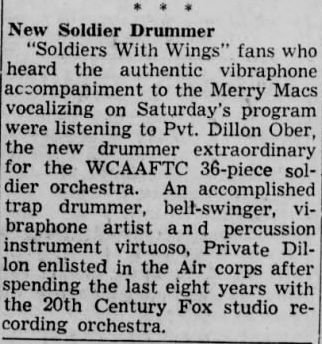 His obituary outlines a long, varied and popular career (as well as an untimely death): 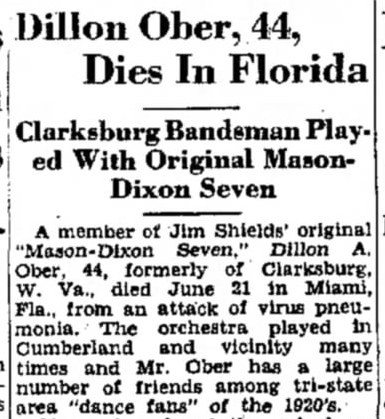 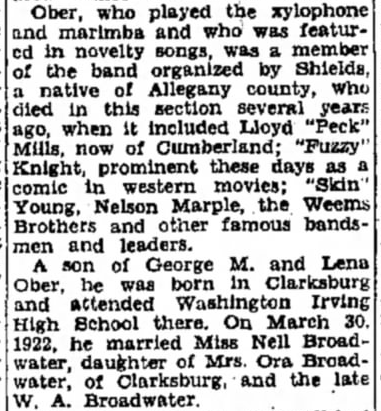 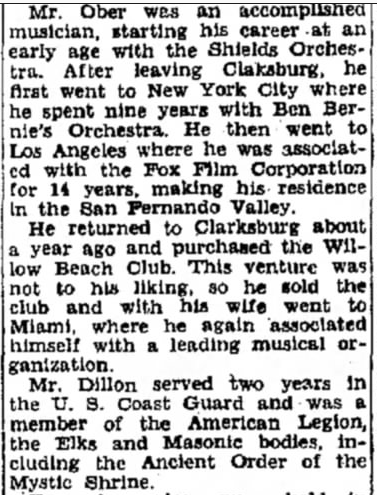