The Ringers: Joe Herlihy And His Orchestra

Joe Herlihy’s orchestra may never supplant Fletcher Henderson in any dance band annals, but it was apparently an exciting enough outfit to replace his group at the Roseland Ballroom.

Copious liner notes by Joe Moore for Jazz Oracle CD BWV 8052, Edison Hot Dance Band Obscurities: Volume Three, explain that Herlihy’s Boston-based ensemble filled in while Henderson was on tour the week of February 14, 1927. Roseland was one of the hottest dance venues in New York City at the time; any band that made it through that audition must have been doing something right. The Edison label apparently thought so, because four months later “State And Madison” was being cut at the band’s first record session.

The Herlihy band recorded the only version of this Jelly Roll Morton tune before the composer himself performed it during his Library of Congress recollections a decade later. It practically dances in syncopation and cuts, making it a shame more bands didn’t touch it. Still, Herlihy’s track is far from a consolation prize.

The band doesn’t just lock into a groove but pops and pulls back as one. The saxes’ deconstruction is especially rhythmic and distinct. Compare this band with Doc Cook, Bennie Moten or Fess Williams, or Jimmy Lytell’s red hot clarinet-led trio on “Zulu Wail” or even the California Ramblers d/b/a the Goofus Five on Okeh with “Vo-Do-Do-De-O Blues” from that month. Herlihy’s band plays with a snap to its articulation combined with warm, soft band textures, like a plush teddy bear sporting glass claws.

Breaks and solos by trumpeter Irving Peskin and trombonist (and future Hollywood comedian) Jerry Colonna are proudly clipped in a way that was already becoming passé. Nearly a century later, the sound is subversively obsolete. Drummer Johnny Williams (father of famous film composer John Williams and a man with a life worth reading about) accents and colors the beat rather than lays it down. Ironically, it’s not until his stop-time solo that he puts down a pattern. Even there, it’s more about subtle and unpredictable accents rather than steady feel.

Later sessions under Herlihy’s name featured different personnel, including several members of the far-better known Jean Goldkette orchestra. Those are excellent sides that don’t sound like this combination, which included Herlihy’s original assembly of fellow New Englanders and broke up after work in New York City fell through. Two takes of this tune and the track “Cornfed” are all that remains of this singular soundscape. 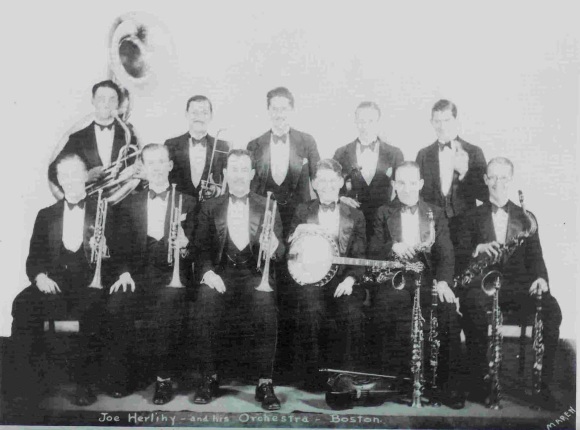 2 thoughts on “The Ringers: Joe Herlihy And His Orchestra”