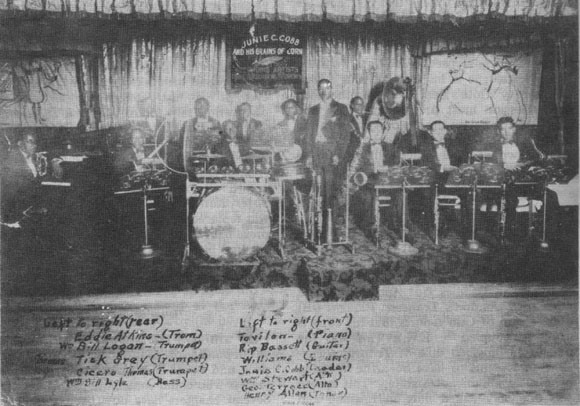 Junie Cobb played whatever instrument was needed for the gig. Discographies list him on clarinet, saxophone(s), banjo/guitar, piano, tuba, violin, cornet, and drums as well as a bandleader. He also sang on a few dates. Later in life, he even played oboe and English horn for Barney Kessel. Yet he played tenor sax like no one else.

He’s the first soloist on “Shake That Jelly Roll” and rarely stays on one note for too long. Instead, he runs divisions like he’s afraid his horn will break if he stops playing it.

Like many tenor saxophonists during the late twenties, Cobb’s burly sound and vigorous arpeggios are reminiscent of Coleman Hawkins. Yet even at fever pitch, Hawkins added slightly longer notes to connect his rapid-fire phrases. He became famous for bringing Louis Armstrong’s vocally-based phrasing and rhythmic innovations to the saxophone in a manner idiomatic to that instrument. Cobb, on the other hand, often sounds like he is playing a giant brass clarinet.

And what a clarinet! Cobb weaves waves of notes that fall in several directions: sometimes up, sometimes down, flashing up an octave, like in “Piggly Wiggly Blues,” or into a belly honk.

Hawkins’s lines have a relentless momentum as well as inevitability, while it’s never clear where or when Cobb will land. On the aptly named “Endurance Stomp,” he sustains an absurdly long note and later provides some slap-tongue bass lines in the last chorus:

Cobb’s tone is slightly drier and sports much less vibrato than Hawkins. Hawkins often roared but Cobb’s timbre hums like an engine in neutral and perennially poised to shift into a higher gear. At slower tempos, for example on “Smoke Shop Drag” Cobb eases up slightly to squeeze out his notes.

He becomes a blue honker on “Panama Blues,” briefly switching to some “mean” (as Tom Dorsey says on the record) soprano sax before quickly switching back to tenor, as though the smaller reed left a bad taste in his mouth.

The Keep (It) Swinging blog’s informative biography of Cobb describes a player whose talent took him from his birthplace in Arkansas to working with Johnny Dunn as a teenager, through stints with Johnny Dodds, Jimmie Noone, and King Oliver in his lifetime home of Chicago, and a stopover living in Paris for a bit.

In other words, Cobb was not an also-ran or studio drone. He knew his stuff and played with passion and confidence. He was also no copycat. Listening to Cobb—not just hearing him—is less a matter of innovation than of style, the way someone wears a dark suit or signs their name. Many others may use the same cloth or letters but the delight is in the details. 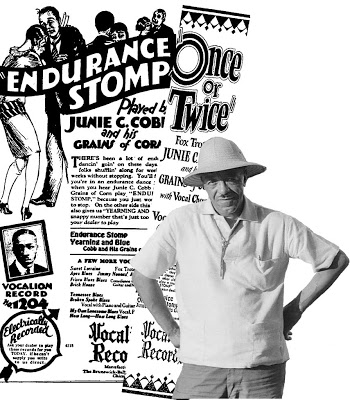