The twenties can now seem very far away, yet “The Surrey With The Fringe On Top,” from a session led by Bobby Donaldson for the Savoy label back in 1958, might make them feel as distant as the Pleistocene era. The arrangement features a deliberate, downright stereotypical “Dixieland” instrumentation and approach, with guitarist Bucky Pizzarelli plucking a banjo, Al Lucas swapping his string bass for tuba and drummer Donaldson tapping on rims. Rex Stewart and Emmett Berry even get to whinny through their horns on the introduction and coda, a throwback to the onomatopoeic “nut jazz” of the teens.

Ostensibly a feature for Buster Bailey, it all makes for a wickedly nostalgic trip back to jazz’s formative years that must have given the notoriously smartass clarinetist a giggle. He puffs away, tone smooth to a point well beyond soggy, delivering the first chorus with a satirical straightforwardness before sailing into more honest improvisation in the second one. 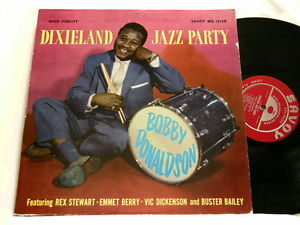 Bailey was the eldest member of the group, four years older than trombonist Vic Dickenson and twenty-four years Pizzarelli’s senior, yet he wasn’t the only one to remember actually playing in bands where banjos and tuba were not just present but very effective. Playing with the likes of June Cole, Ralph Escudero and the indomitable Cyrus St. Clair, Bailey had felt the heft and punch of a gifted tuba player. Lucas seems to have only ever played tuba on record for this tune and a lone “Caravan” from an Illinois Jacquet date ten years later. To Lucas’s credit, his stubbornly ponderous roots and fifths and potbellied tone add their own ambience. Whether or not he was a “good” tubaist or even liked the instrument, he also stays in tune and on the beat, remaining a musician even as he sticks to making an effect.

Bucky Pizzarelli acts the part of a “commercial” (as in, more likely to backs jingles than jam sessions) banjoist with the Peter Sellers-like conviction, using rhythmic stiltedness and thin voicings to set the stage but never get in the way. It’s easy to imagine full-time rhythm banjoists such as Johnny St. Cyr or Tommy Fellini laughing along with Pizzarelli, or wry humorist Eddie Condon doing his own imitation. Whether Donaldson’s penetrating, robotic rim clicking is deliberate or not, it’s far removed from the what Frank Snyder did for New Orleans Rhythm Kings in the twenties or the Original Dixieland Jazz Band’s Tony Sbarbaro accomplished well into the fifties.

It’s all so hokey that it turns into exaggeration without mockery, satire that reminds of better execution but doesn’t throw out the source material. Thirty years can also seem like a long time, but it was short enough for at least Bailey, Dickenson and Stewart to remember these instruments, ideas and best practitioners still in the process of being declared passé. There’s no way to tell what any of these musicians thought, but their playing makes one very insightful joke.