“Walk” Is An Understatement: Three Takes of the Charlie Johnson Band

A good friend’s accolades for George Stafford recently got me re-listening to the drummer’s concise but powerful discography. Stafford’s steady beat and way with “the pocket,” even on his earliest sides from the mid-twenties, make him an unsung hero of jazz percussion. His temple blocks and snare ease back and then detonate on “I’m Gonna’ Stomp Mr. Henry Lee” with an Eddie Condon group featuring Jack Teagarden’s vocals and trombone. Yet it’s Stafford’s drums on “Walk That Thing” with the Charlie Johnson band that remain a personal favorite. 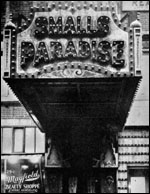 The Johnson band was one of the hottest bands of the twenties as well as a close rival of the early Duke Ellington orchestra. Arranger/tenor saxophonist Benny Waters glows with pride remembering his time with Johnson. Like Stafford, the band also left a tantalizingly short recorded legacy. Through some miracle of fate they were able to record three (!) takes of one of their hottest numbers, a Johnson composition arranged by Waters and deceptively titled “Walk That Thing.” They could have used a lot of other verbs to more accurately describe how they move on this tune.

Take one pumps from the start. The leader hammers away on piano, followed by a snappy introduction for the full band and Waters showing his clear appreciation for Coleman Hawkins:

Waters’ arrangement leaves plenty of room for soloists but includes the type of passages that jazz historians love to point out as some teleological predictor of the swing era. Riffs behind soloists, divided brass and reeds and a shouting final chorus would become standard issue for big bands a few years later. At the same time the rhythm team of banjoist Bobby Johnson, tuba player Cyrus St. Clair and Stafford are more rooted in twenties stomp than thirties swing. Waters also includes unique touches like a tenor sax lead alternating with the more standard alto in the first chorus, and space for wild collective improvisation. It’s easy to dismiss the use of brief solos for the rhythm section as “original for its time.” History lessons aside, they cook.  Check out take two:

Waters chops and chugs on the second take like he’s using a cement saxophone. It’s not Basie-style swing but it does have its own percussive energy. Trumpeter Sidney de Paris strolls through his stop-time choruses, varying his solos from take to take but loving the same double-time figure. Jimmy Harrison’s hard, blistering trombone punches through in solo and ensemble, and his breaks resemble smartass quips from the kid at the back of the classroom. This take is effective if a little weighty. By the third and final take, the band is really into it:

That’s more like it! Even if someone hit a clam on the opening chord, a slightly quicker tempo and Waters pushing at the rhythm start things off strong. All of the soloists loosen up their phrases, dancing between the beats but with an intensity that defines the best twenties jazz. The rhythm section spots include a lot of the same notes and phrases, but the band’s energy elevates the familiar to a whole new experience.

The hits keep coming through all of these takes: Johnson cutting through to comp simply but spurringly; Stafford, a true band drummer who fills in between phrases, varies his patterns and plays with balance rather than volume; Ben Whitted (perhaps best known as the clarinetist Fats Waller saw fit to replace for his thirties small group sessions) wailing over and against the ensemble. Through an even stranger twist of fate, none of these takes appear on YouTube or apparently anywhere else on the web. Consider this a public service. What are friends for?

4 thoughts on ““Walk” Is An Understatement: Three Takes of the Charlie Johnson Band”