What do Fess Williams and Eric Dolphy have in common? For starters, both played for none other than Charles Mingus.

Dolphy, prophet of the jazz avant-garde, deeply admired by Mingus and considered one of the most galvanizing forces to ever play with the bassist/composer, and Williams, an incredibly popular bandleader during the twenties, now mostly remembered for his gas pipe clarinet that even diehard collectors merely tolerate: both appeared at Mingus’ (in)famous Town Hall Concert of 1962. Dolphy performed most of the show, but Mingus brought Williams, a.k.a. his Uncle Stanley, onstage briefly to show off some circular breathing.

Even more important than a boss or an uncle, Williams and Dolphy share an ear for the humorous and disturbing, a penchant for making their instruments squeak, honk and pop, throwing in plenty of gangly dissonances and other sounds that most musicians leave behind alongside soft reeds and method books.

Compare Williams’ jagged breaks at the beginning of “Playing My Saxophone”:

with Dolphy’s entrance on his groundbreaking “Out To Lunch”:

and it’s easy to hear that both reedmen simply love sound: the more jarring, the better. It’s fun to imagine Dolphy and Williams backstage at Town Hall, not saying a word but merely trading squawks and fractured themes.

Both Williams and Dolphy also snub their noses at the clean lines and cultivated timbres no doubt enforced at the conservatories they trained in. That makes them both rebels, and jazz loves a good rebel! Yet given Williams’ period of activity and the large audiences he played to, his rejection of classical instruction seems more commercial, and therefore more suspect.  Most jazz histories (when they mention Williams at all) relegate him to “novelty.” Williams was out to make a buck, Dolphy sought to change ears and minds. Dolphy is the artist, Williams was merely an entertainer.

It’s a neat little distinction, but it speaks more to cultural interpretation than sheer sound. Dolphy does often display much quicker fingers and harmonic variety, yet that’s as much of a stylistic choice as Williams’ reliance on a percussive sound and bumpy phrases.  Even when the sounds aren’t so similar, both players’ sense of taking the listener to a different, even weirder place is clear. Simply listening to Dolphy’s blurting, burry bass clarinet on “Booker’s Waltz”:

back-to-back with Williams’ ambling slap tongue solo on “Dixie Stomp” illustrates two musicians who liked to play in every sense of that word:

Yet even assuming that Williams was just goofing off to make a buck and that Dolphy was in fact the serious artist pushing boundaries, all the listener is left with is the sound. The sound is out there to be heard.  Trying asking it about its motives, or whether it’s a novelty or work of art. 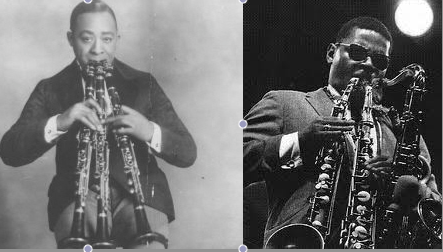 8 thoughts on “Fess Williams and Eric Dolphy Playing Their Saxophones”